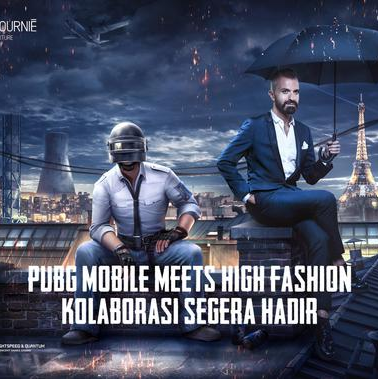 Today PUBG MOBILE, one of the most popular mobile games in the world, has announced a partnership with fashion designer Julien Fournié and his fashion house Haute Couture. This partnership will combine two industry leaders, fashion and gaming, in an exciting crossover in the PUBG MOBILE game.
This moment is the first time for PUBG MOBILE to partner with fashion brand Haute Couture, of which there are only 15 worldwide. It was officially announced at Paris Fashion Week Haute Couture where more details of the collaboration will be revealed in the coming months.

Julien Fournié is a French fashion designer known for his work in Haute Couture, a fashion discipline that focuses on exclusivity, originality, creativity, innovation and traditional manufacturing processes.
One of the characteristics of Julien Fournié and Haute Couture is that this fashion house only creates unique pieces of clothing that must be ordered in advance so that the fashion products can be specially made in order to exude the extraordinary beauty of French fashion.

A symbol of supreme luxury, Haute Couture is a term protected by law in France. There are only 15 brands that can legally bear this label, one of which is Julien Fournié. It is this innovation that makes Julien Fournié the ideal partner for PUBG MOBILE, whose focus on self-expression and a series of partnerships with the world-renowned Intellectual Property (IP) have given its players the ability to create their own unique identity.

During Paris Fashion Week taking place on July 6, 2021, Julien Fournie revealed his Fall/Winter 2021/2022 collection through an online film titled "FIRST SQUAD". Through his fascination with superheroes and new technologies, much of his collection is inspired by the aesthetics of video games.
At the end of "FIRST SQUAD", Julien Fournié announced his collaboration with PUBG MOBILE by showing the two iconic brands side by side. From that moment on, PUBG MOBILE, a game that focuses on player self-expression, will provide key inspiration for Julien Fournié to combine fashion and gaming.

"Collaborating with PUBG MOBILE is a dream come true for me," said Julien Fournié.
"Not only, PUBG MOBILE is the top-ranked mobile game on the planet. But the most important to me because it allows millions of players from five continents to interact and explore other dimensions together, to take on challenges, and improvise. This is what Haute Couture has in common with PUBG MOBILE, which is that it encourages you to explore your dreams and learn from them to discover your legend. I can't wait until gamers find out what we have in mind for them!"

PUBG MOBILE has partnered with well-known brands in various fields and industries since its launch in 2018. However, this is their first collaboration with fashion designer Haute Couture and marks an unprecedented crossover of gaming and high fashion culture.