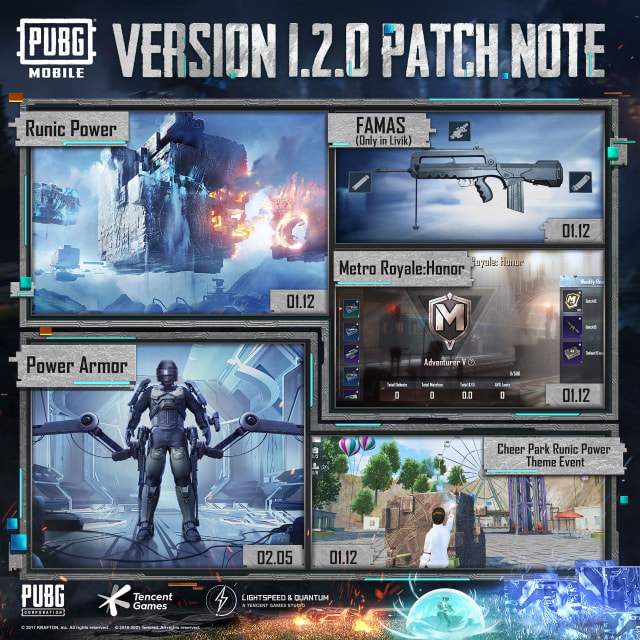 PUBG Mobile is a Battle Royale game that has an optimal level of balancing as a lot of shooter game lovers are playing this game.

However, even with this fair mechanism, Tencent as the PUBGM developer must always innovate so that the players do not experience boredom with that game play - that's all.

Entering the middle of January, PUBGM announced that they will update the game by releasing Patch version 1.2 as this will also be their first update in 2021.

Reportedly, in this update, PUBGM not only updated the game features and content but also issued a new mode, namely Runic Power.
Runic Power itself is the latest mode released by Tencent in the PUBGM game. This mode is almost the same as the usual battle royale, the difference is that we will get additional abilities or strengths that make players stronger and make it easier to get Winner Winner Chicken Dinner, of course.

This additional strength that we get comes from a rune that we can choose one of them at the time before the start of the match. Of course, there are different rune options, so that each player has different abilities.

There are 3 runes that we can choose from, namely Flame Rune, Arctic Rune, and Wind Rune. These three runes have different abilities. In each rune, there are 2 skills that we can use, namely the ability to summon and also a boost skill. To use the summon skill we need to use 10 energy and for boost requires 5 energy.

For more information, let's look at the explanation!

Skill Summon: Summons a burning wheel and crushes everything in front of it. Every player who is crushed will be hit by damage per second for some time.
Skill Boost: Provides burn damage to bullets fired at the opponent.

Skill Summon: Summons a chunk of ice that we can use to block the opponent's attack. This ice wall can also be destroyed.
Skill Boost: Provides a freeze effect on bullets fired at the opponent.

Skill Summon: Summons a bubble that can reduce the damage of an opponent's attack from all directions.
Skill Boost: Increases reloading speed and movement speed.


That's a little explanation regarding the Runic Power Mode which will be updated in Patch note 1.2 later.

Certainly, not only Runic Power mode but also the Fams that will be issued by Tencent later, there are also other modes that are no less interesting. So, stay tuned fams!